For the past few weeks, I’ve been experimenting with something that on the other side of the Atlantic, is a contentious subject.

That something is e-bikes, or to give them their correct name Pedal Assisted Electric Cycles. PEDELCs for short.

A bone of contention

If you read many of the US cycling forums, e-bikes are the root of all evil, the destroy of trails and the harbinger of a bike ban covering all the countryside.

And I can see the point. If you have high-powered electric bikes i.e 750w / 1000w in the hands of an irresponsible minority who use them like motorcycles to rip-up the trail, then that will taint public perception of all e-bikes.

Here in the UK, we have legislation which limits not only the power, but also the speed of electric bikes. Hopefully, this will prevent any trail and countryside damage.

Having ridden several models over the past few weeks, I found it difficult to damage the trails with a pedal assisted 250w electric powered bike. I left no more an imprint with an e-bike than I did with a pedal only bike. This could, of course, be due to me being a careful rider.

I write a community cycling column for my town’s local paper and have been fortunate enough to test a number of e-bikes over the past few weeks (courtesy of Huntly and District Development Trust) , including cargo, town and my favourite – the mountain e-bike.

The Scott E Aspect 720 is a great hardtail electric bike. It comes equipped with the latest Bosch CX motor which is based on a torque sensor , meaning the harder you pedal, the more power it delivers. It’s a great all-round mountain bike and rides really well. 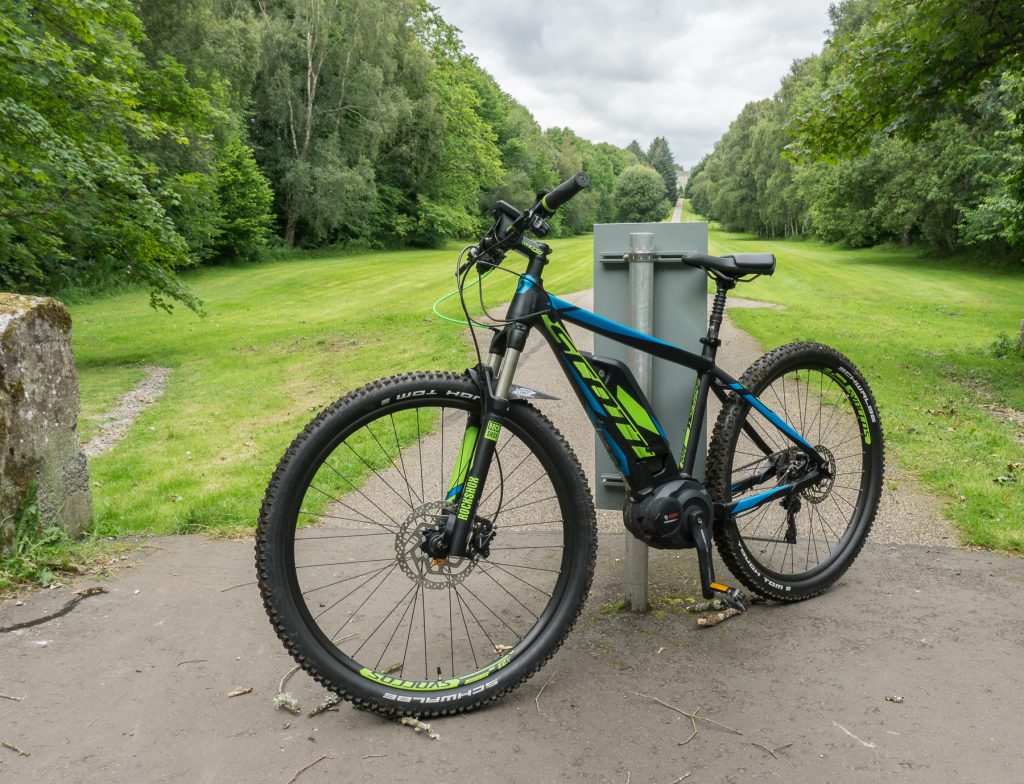 However, the price of the Scott is is on the steep side at approx £2,499 and, if you’re a hardcore trail rider, expect to pay in the region of £3,000 to £4,000 for a suitable slack angled e-bike with decent suspension and components.

Which leads me to my next option. The retrofit Kit.

I have a well-specified trail hardtail, a Whyte 901, and can’t justify spending a significant wedge of wonga of a new bike (I don’t have the cash anyway). So I went for the retrofit option.

After much research, I purchased the Bafang BBS01 mid drive model from Brighton Bikes. This comes it at less than a third of the cost of the Scott E aspect. 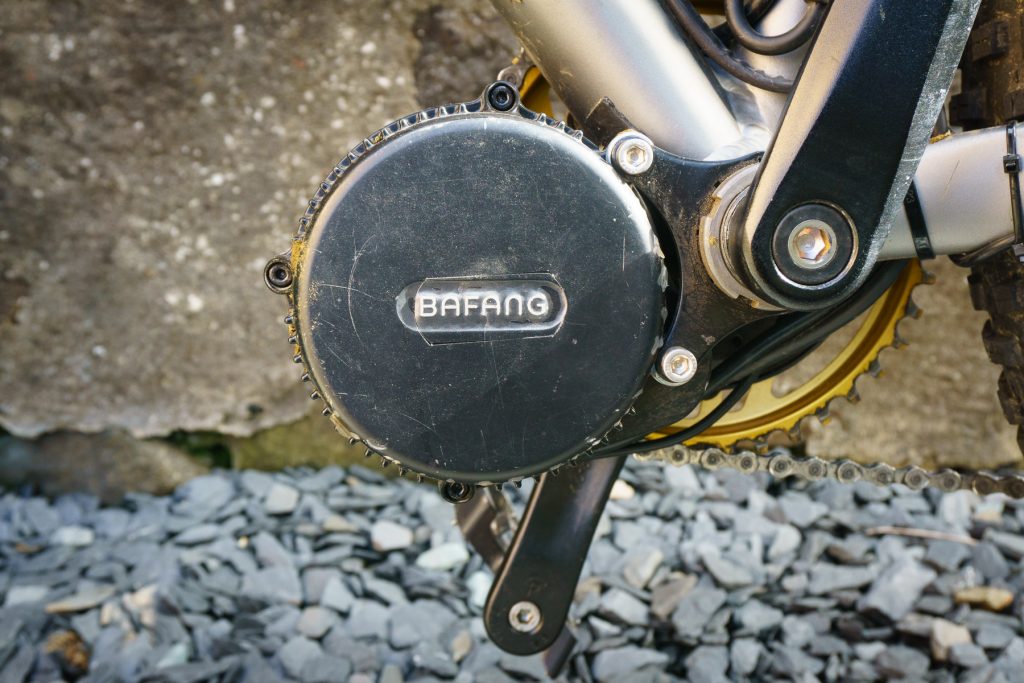 Was it easy to fit ? Relatively easy.

The kit replaces the crankset with its own drive and pedal unit. I trained as an engineer, which came in handy during the install. I needed to make a bracket for the battery, space the motor, and space the chainring to get a working chain line. Fitting the kit requires the removal of the front derailleur, turning the bike into a 1 x 10.

One of my main reasons for having an e-bike is to tow my Fat Bob trailer, but the smallest front chainring that can be fitted while maintaining a reliable chain line is a 42t Bling Ring. Even with gearing of 42 front x 36 rear, it’s still too high.

A gearing upgrade was required, so I upgraded to a Sunrace 11-42 rear cassette which worked well with my Sram rear mech. Until s the B screw adjuster broke. A subsequent Internet search revealed that this a common problem when using this rear derailleur beyond its design limit.

Another drivetrain upgrade was required. This time to a Shimano XT rear mech and shifter along with a Wolfrace goatlink to accommodate the larger rear cassette. 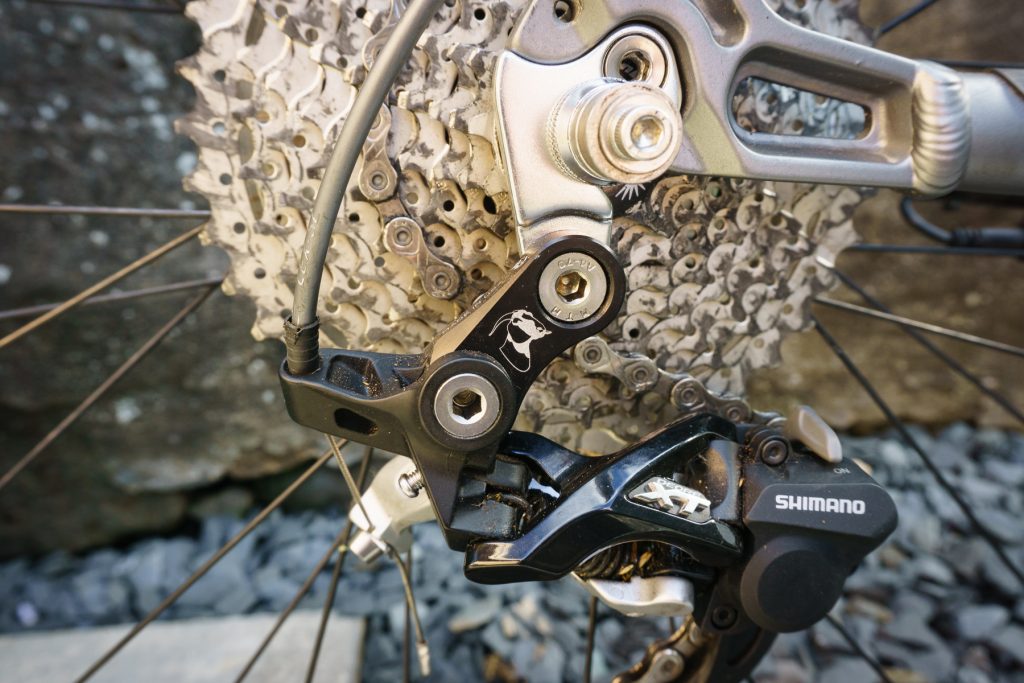 The result super smooth shifting. In fact better than the standard setup.

After fitting the kit, I set out on a test ride.

I was bitterly disappointed. The Bafang was nothing like the Bosch equipped Scott. And that was the problem. I’d ridden a top of the range bike for three weeks. Anything else was going to be a letdown. Especially in a back to back comparison.

It didn’t help that the Bafang motor as shipped, is configured with a very safe and reliable ‘tune’. Which is fine for town bikes but woefully inadequate for a mountain bike.

To be fair the Bafang doesn’t use a torque sensor. Instead, it utilises road speed, pedal speed and some fancy algorithm to deliver a percentage of power at varying cadences.

The solution was a USB cable and a download of custom software. Five minutes later and I’d mapped the power delivery curve for off road use.

What a difference. This was more like my expectations. But it comes at a price. The battery drains noticeably quicker compared to the standard setup.

The ultimate test is to go on a camping trip. Both bikes handled the fully loaded Fat Bob trailer with ease. None was better than the other. I found I climbed steep hills with little effort on both, and I couldn’t tell the difference between the torque sensor motor and the speed sensor motor.

As expected, both bikes drained the battery rapidly when towing the trailer. Battery life in this scenario is probably 15 – 25 miles at most. If you plan going longer distance then a spare battery is a must.

For bush-biking, they work well with a trailer as the battery fits in the bike’s main triangle, leaving no space for a frame bag. I could use panniers, but I don’t like panniers as much after trying other options.

An unexpected, but welcome benefit of using an e-bike for bush-biking, is that the additional weight makes towing a trailer much more stable. No more tail wagging the dog. 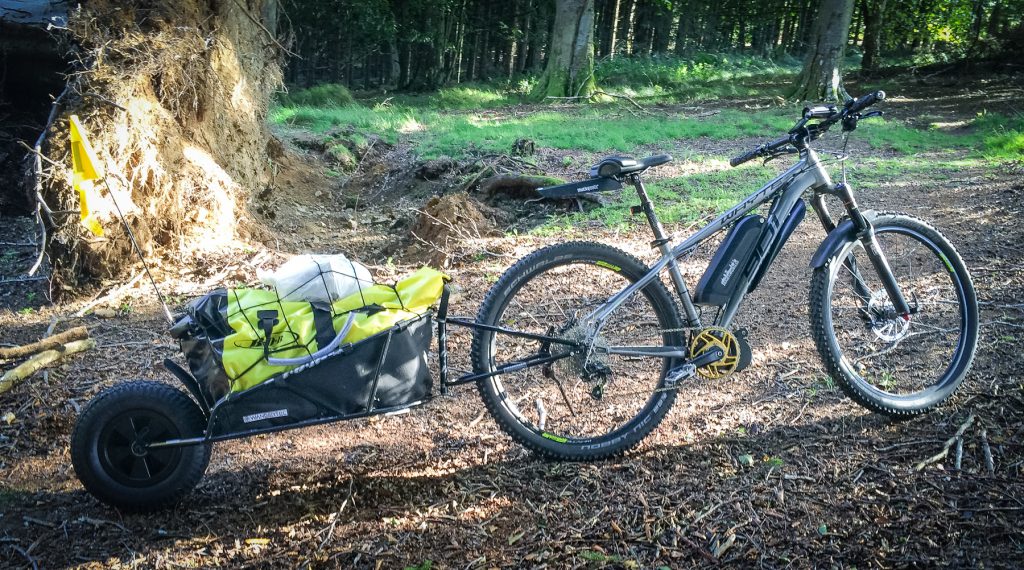 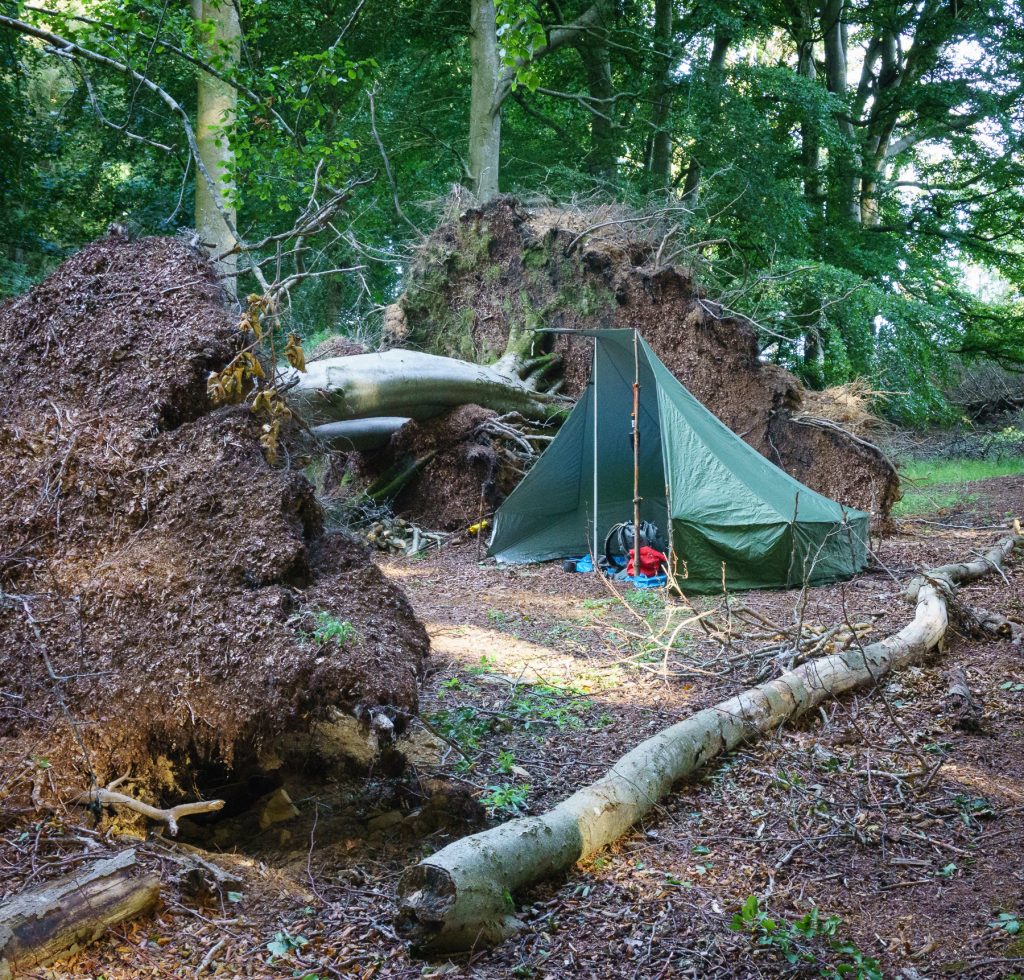 Three trees down – a good spot to camp

Do e-bikes have a place is bush-biking / bike packing ? For me, the answer is yes. But a qualified yes.

E-bikes open up cycling in whatever format, to those who cannot otherwise cycle due to disability, injury, fitness level or age.

Speaking from experience they make a huge difference. After having lung surgery last year, I struggle with cycling up hills. Now, using my e-bike allows me to cycle everywhere without getting [too] breathless.

They take the slog out of those long climbs and I arrive fresh and not soaked in sweat. 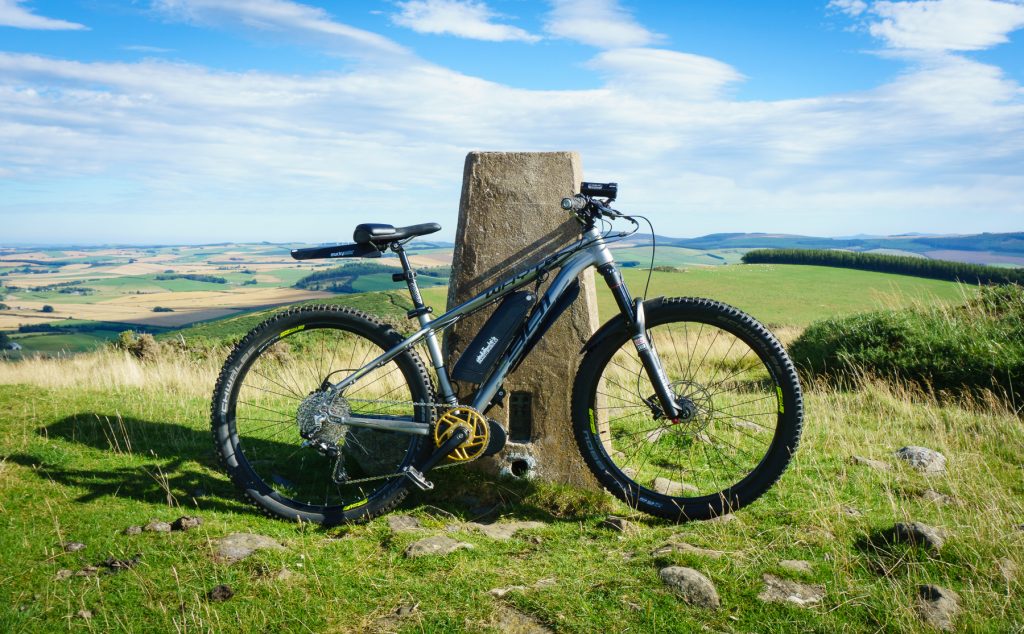 As for which is best, an off-the-peg bike e-bike or a retrofit kit ? The decision is yours.

If you have the money and can justify the spend, go for an off-the-peg bike. If you like to tinker, want to keep your existing bike or don’t want to spend the cash, then the retrofit kit is a good option.

Both have their plus and minus point. One is not better than the other, just different.

And then, of course, there is the matter of reliability . An e-bike is like any other consumer gadget. It can and will probably go wrong. It is just a matter of when and where. I don’t want that to happen when I’m out in the wilds. So just now I limit my e-bike micro adventures within battery range.

The question which I am sure you’re thinking is, will it replace my non-e-bikes ? In my case no. I like the feel and the sense of achievement I get with my expedition fat bike and other pedal-only bicycles.

Perhaps when the technology evolves to a point where the price differential is minimal and battery life increases significantly, I may change over. But until then I’ll keep both my pedal cycles and electric bike.

Don’t let that stop you though. If you get the chance to try one , jump at the opportunity. Even better if you can take one out on a camping trip.