Winter has arrived. Well it had when I started writing this post.  What I love about winter is the weather we get.

My favourite is frosty mornings.   I love the sharpness, ice on puddles and if we’re lucky frozen rivers.  Although I haven’t seen it for a good few years,  I remember the Deveron being frozen over when we were kids.  The ice was at about 3 feet thick and we were able to walk across from one side to the other.

The second type of weather I love is when we get  6 inches +  of snow for a sustained period. Most people seems to have forgotten how to cope with snow.  Especially  how to drive through it.  Trains and busses stop, schools close, traffic into Aberdeen grinds to a halt with 7 mile long queues.  But I still love this type of winter.

So when it snowed last week I was hoping for lots of it.  Unfortunately it was a dusting and very short lived.  Maybe one day this winter I’ll get out on my fatbike in some real snow.

It’s probably just as well as I was suffering from a reaction to the Flu jab I received recently.  For about 5 days I was shivery, had aching muscles and felt a distinct lack of get up and go.

Last weekend having recovered, I decided to try out my fatbike in the icy conditions.  Sunday was a typical frosty winter’s morning.  Bright sunshine, no wind, zero degree temperature and puddles frozen over with thick ice. Perfect.

Having been along the Deveron the day before, I chose to go to the BattleHill via Tammie’s and Pirriesmill.  Off I went down East Park Street and along Lenox Terrace.

As I made my may towards the entrance to Tammies I noticed the curling rink had frozen over.  A quick change of route and I was headed down the steps to the rink. Not so much steps now as these have been eroded by weather and lack of maintenance.  This seems to be a common theme around Huntly.

Good job I took the fatbike.  With handlebars of 720mm wide I just manged to fit in-between the handrails without trapping my fingers.  Had I taken any of my other mountain bikes I wouldn’t have been able to get down there without breaking a finger or two. 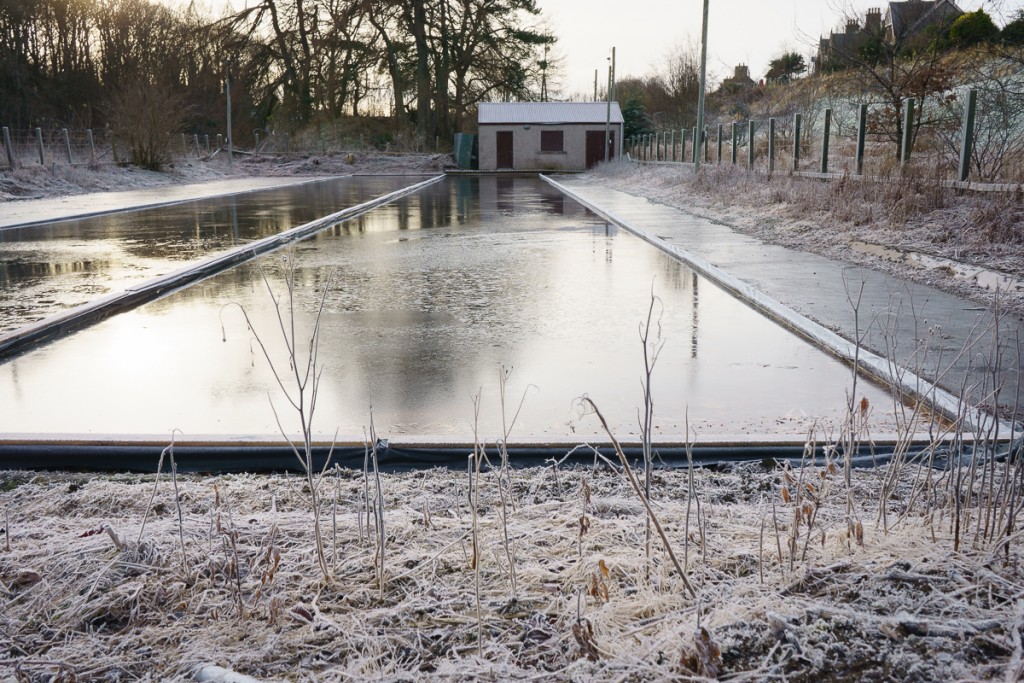 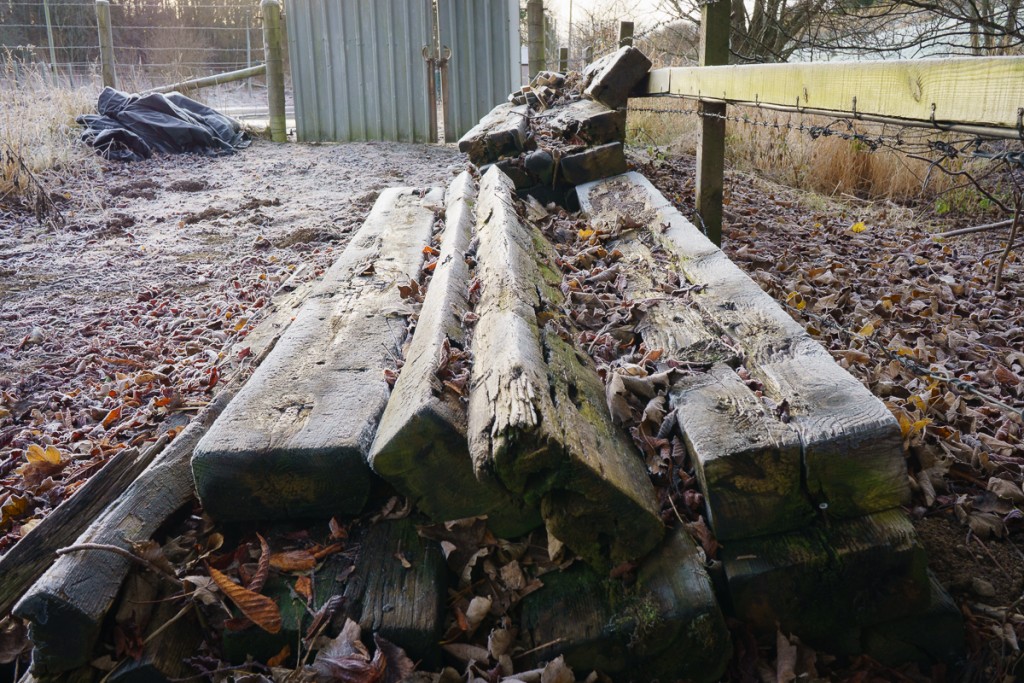 I took some photos and headed across the long, frosted tangle of grass towards the footbridge.  With 4” tires and rigid forks, the Surly Pugsley made light work of the terrain.

As I neared bridge, I could see the remains of giant hogweed.  They resembled giant stick men marching down from the hill top.  The riverbanks tend to be kept clear of this menace thanks to Huntly Angling Association.  However, farmland is the responsibly of the landowner and there seems to have been no control of the plant done further back.

Giant Hogweed is photo-toxic.  That is, if you brush against it or get the sap on your skin, it reacts with sunlight and causes huge painful blisters. These burst and you get further blisters. Scars can take years to heal. I still have hogweed marks on my arms from my teenage years. 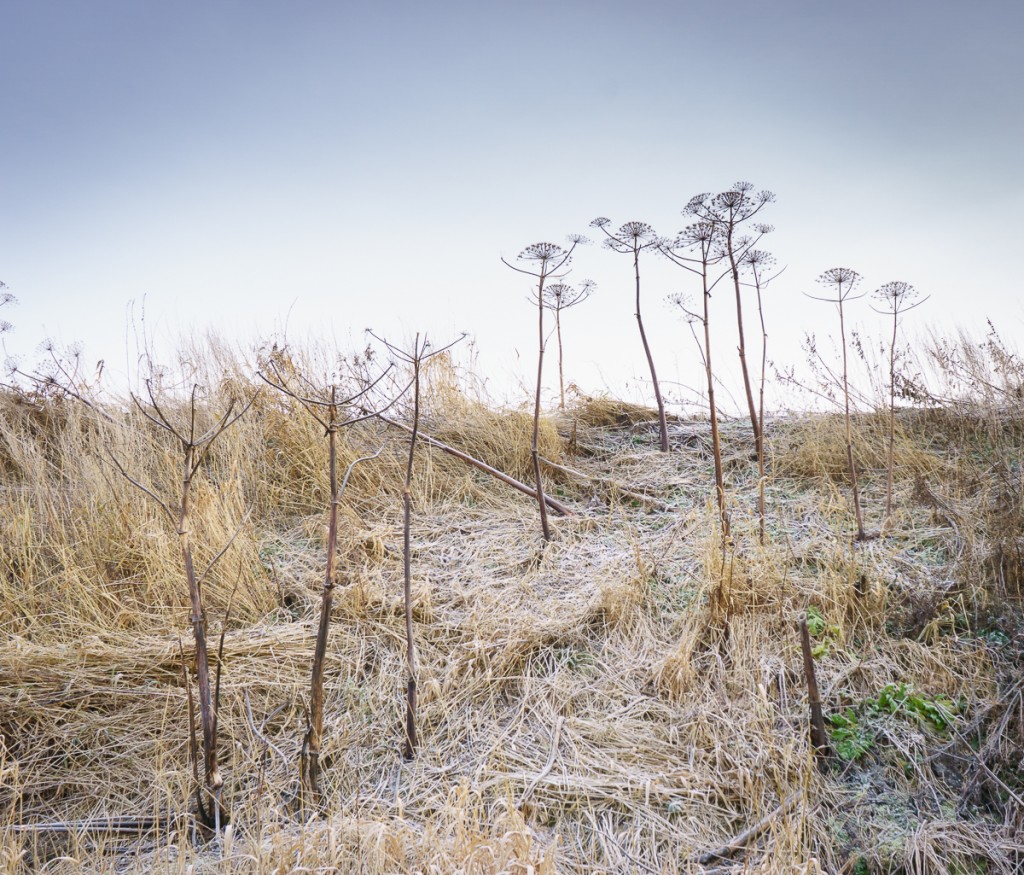 The species is non-native to the UK and  was originally imported as an ornamental plant.  Over the years its spread throughout Scotland.  I seem to remember being taught that it was first introduced at Leith Hall Gardens in Victorian times.

What makes it particularly difficult to control is that the seeds can lie dormant for 15 years before germinating.  One plant generates years of work!  Enough of the botanical lesson for now.

Cycling on through Pirriesmill, I couldn’t  but help feel a tinge of sadness.  Pirriesmill was one of the two main milk producers in the Huntly area.  It was a thriving dairy farm, and it was most teenage boys’ ambition to get a job on the ‘Milkie’ delivering milk around town.  It was way cooler than delivering papers. 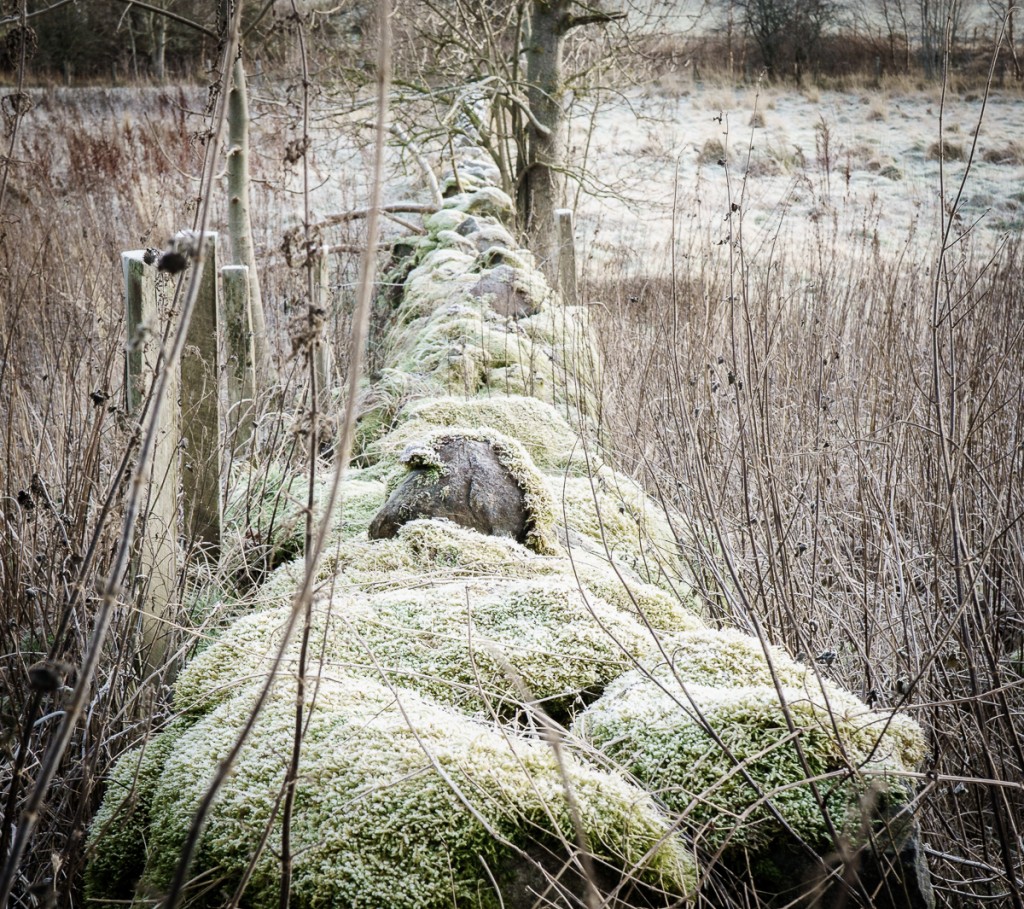 Today the site is just a ruin. The parlour and buildings now lying in decay.  The target for vandals and a whiteboard for graffiti. 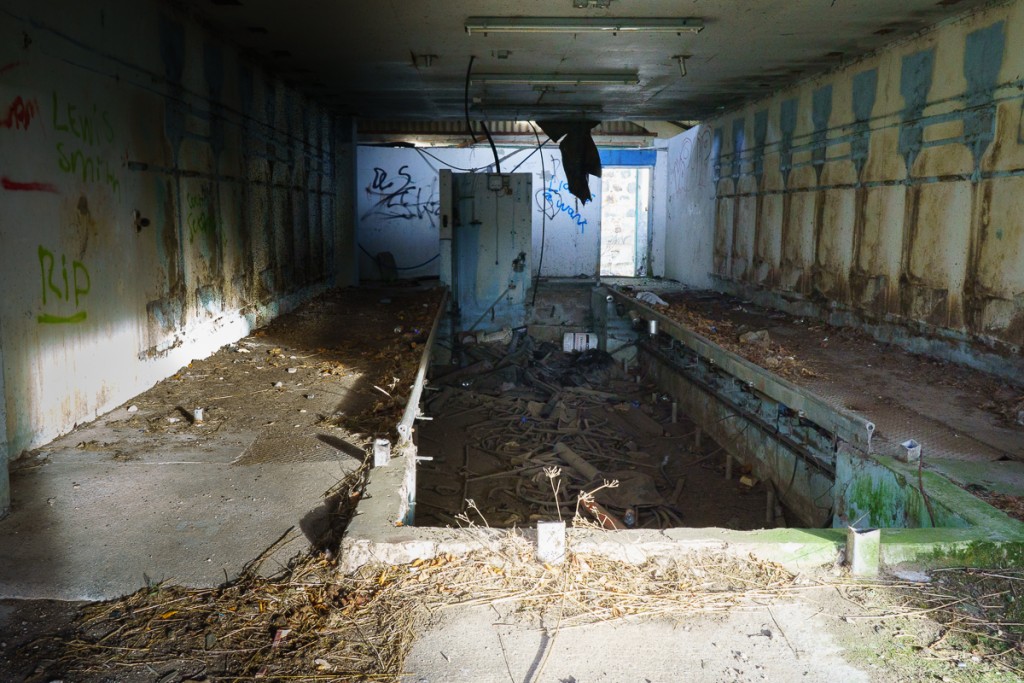 Heading up the farm road and over the railway bridge I was greeted by an island of green in a sea of white.  Due to tree cover, the grass under the trees hadn’t frosted.  It looked ethereal but unfortunately I didn’t take a photograph. Next time though…

A brief pause and I was on my way to the BattleHill.  Every puddle along the farm track was encrusted in a thick layer of Ice. Like a big kid, I cycled over them to see if they would break. They didn’t and it was fun trying.

I continued up the  hill on the access road.  Here sections of sheet ice covered the road like mini skating rinks.  Testing the winters tires I fitted last week, I was impressed the  level of  grip they had. So I stonked hard on the pedals.

I was quickly rewarded by the rear wheel loosing traction. This was followed in a split second by the front wheel doing the same.  A quick dab of my right foot prevented an embarrassing fall.  Thankfully no one was watching and I continued all the way up the remains of the steps and into the woods.

I did have to stop and catch my breath though. I’m not yet a super athlete. Nowhere near. 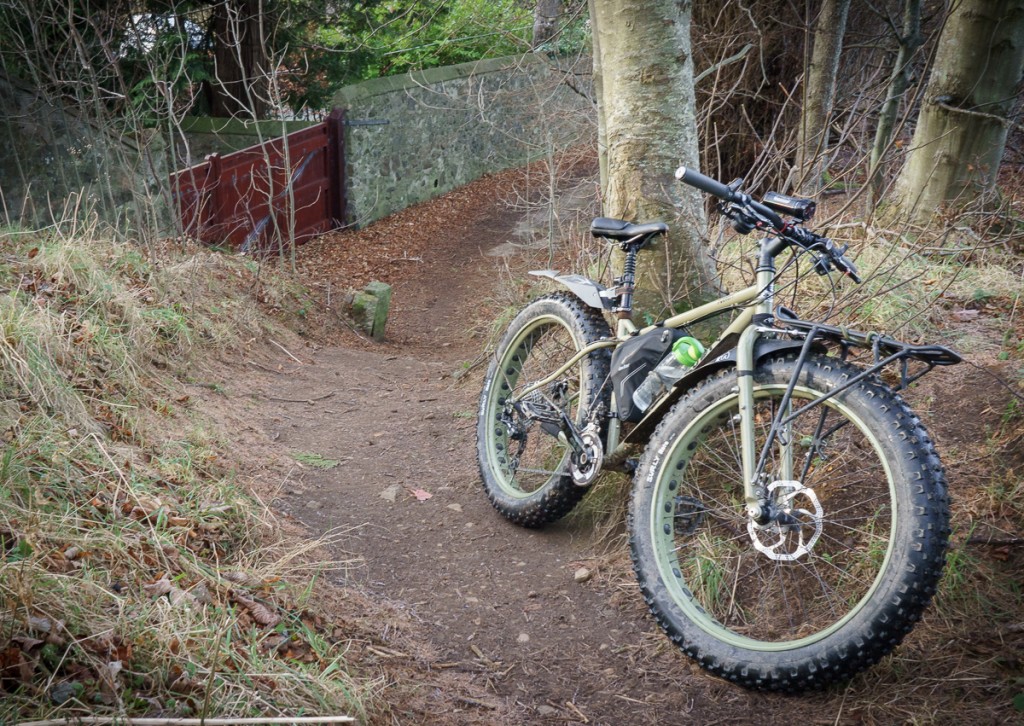 A few minutes later and I had completed my half journey to the community hut.  I parked the bike and had a sit down.

As I sat taking in the view I thought to myself that nature never ceases to amaze me.  I never tire of the cycling the same paths.  Each day Mother Nature paints a different picture of the landscape. 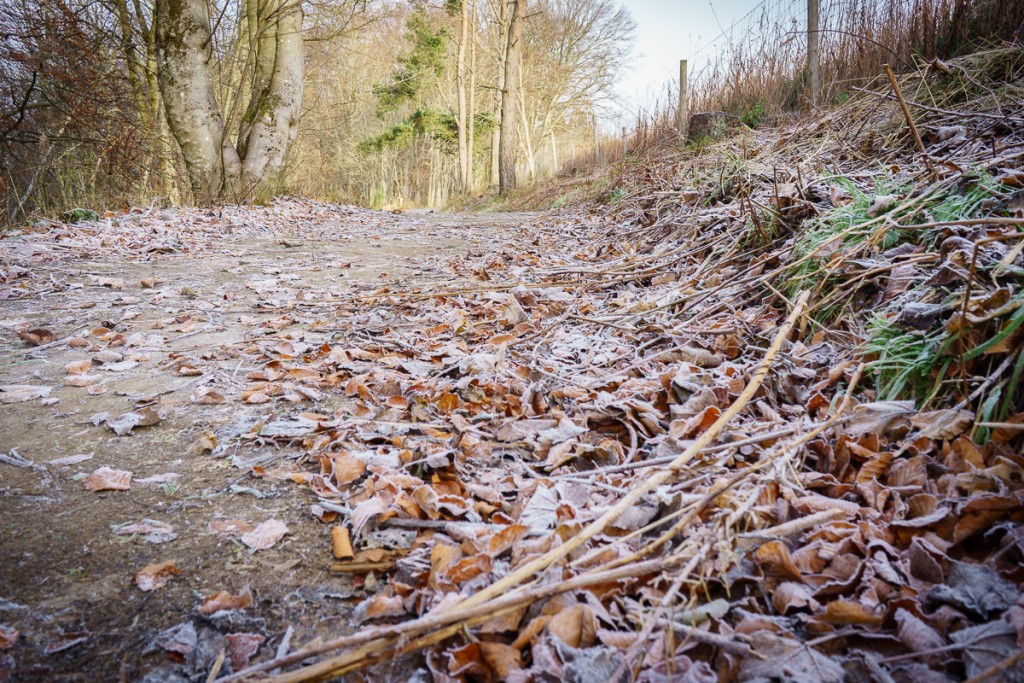 Today the land was cloaked in a thin white veil.  The browns and oranges of fallen leaves were shimmering in the frost’s translucency.  Tufts of grass resembled sea anemones with their tentacles flowing in a sea of white.  Fallen oaks were transformed into three dimension artwork. 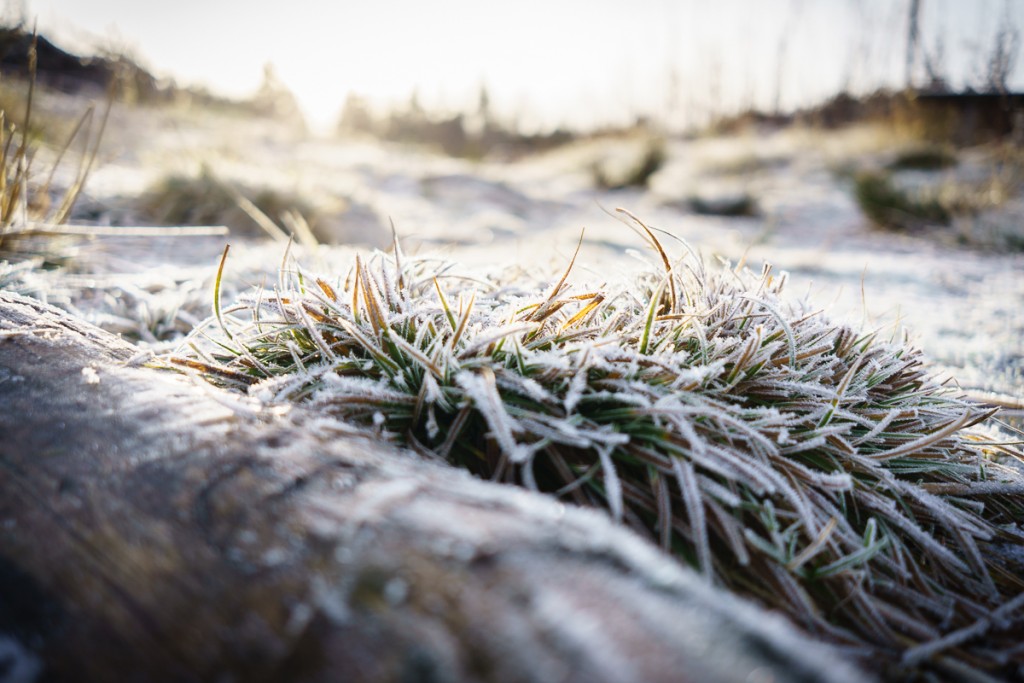 I could spend hours up there.  Chilling, taking photographs and drinking tea. That was the plan.  I was all kitted out with thermals, woolly hat & gloves and camera at the ready.

I had a good few photos taken and was just about to break out the tea making apparatus when OMD’s “Enola Gay” broke the serenity.  My phone was ringing. It was Mrs. Doric Div.

I thought it best was to answer in case there was an emergency.  Thankfully there was no emergency.  Instead I was invited out to lunch.  I heartily accepted as I was getting a bit hungry.  I captured the last few images of the day and headed back into town. 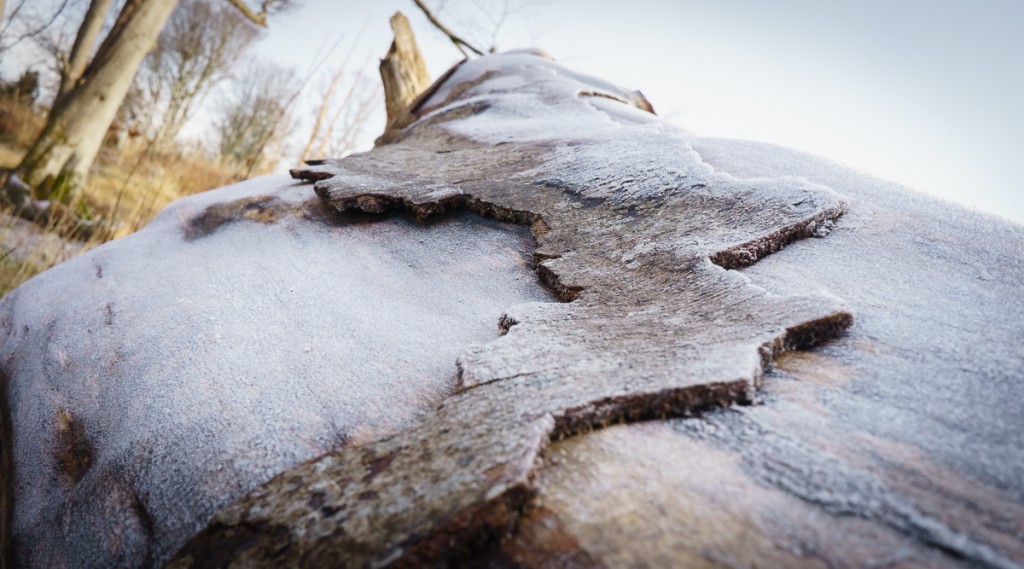 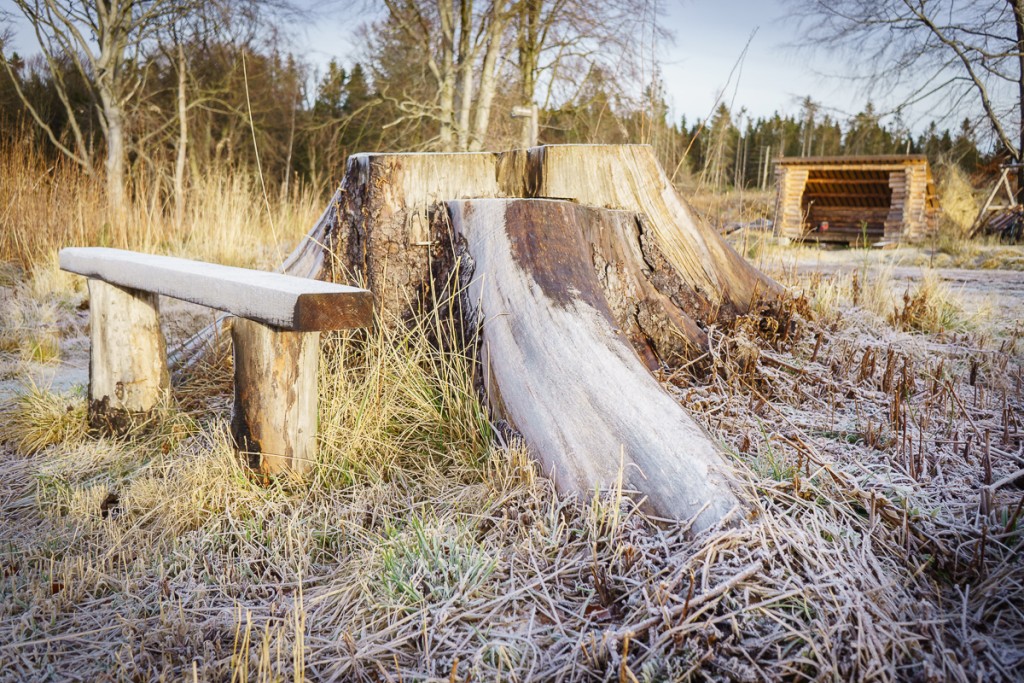 It would have been foolish for me to take the same track down as I took up the hill.  Even with the grip of 4” tyres there could only be one outcome with the combination of sheet ice, speed, the application of brakes and trying to negotiation a corner.  A rapid collision with the ground.  And in all likelihood an uncontrolled, painful collision.

So I choose to take the gentler route down the old quarry road.  Taking it nice and easy I was home in 5 minutes. Twenty minutes later I was sitting with my wife, enjoying our first Xmas lunch of the year.  What a great day.

3 thoughts on “Winter is here … almost.”